I didn’t do quite as well as last year, but I did get a few gongs

Class 28: Cream tea for one 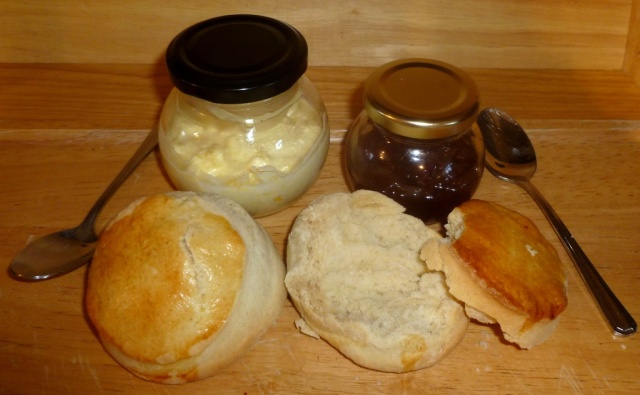 The first batch of scones I made didn’t rise very much. I’m not sure whether that was because I didn’t put any/enough baking powder in or because I didn’t bake them long or hot enough, or maybe a combination of the two. I made a second smaller batch which turned out much better, but apparently not well enough to please the judges. The schedule says that this class is judged only on the scones, but they did leave a comment praising the presentation, so maybe I need to pay more attention to that next time. 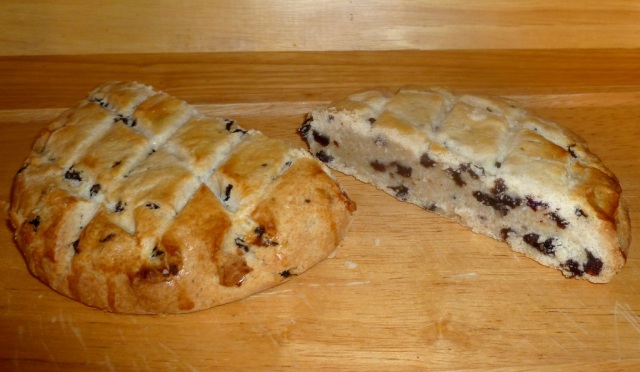 My practice heavy cake a few weeks ago was the first time I’ve managed to produce one with a heavy line, and this one that I entered also has one. I think this time I slightly underbaked rather than massvely overbaked though.

I’m getting a bit better and a lot more consistent at crimping, somewhat helped by making 6 pasties at a time (my freezer is now full of them). Something’s gone backwards though; I got second place last year in the gent’s class but nothing this time.

The recipe in the show schedule called for approximately half a can’s worth of stout, so I made two. The recipe also mandates a 7″ tin, but only one of mine is tall enough, so I ended up with two different sized cakes. I figured it was better to enter the one which was slightly too big rather than the slightly too small one, and it was better baked. The top was a bit cracked, but so were some of the other entries.

The practice bake came out really well, but I think these needed a few more minutes in the oven. My search for splits in any of the local bakeries was an almost complete bust: nobody seems to make them any more, but I did get some advice on what they should look like. They should be darker on top.

My biggest disappointment this year. The practice bake for this came out looking fantastic, but didn’t have quite enough filling, and was slightly underdone. Whereas the actual bake had too much filling, or maybe just not very well sealed joins. I did get an individual comment from the judges for this one; they loved the flavour (Red Shropshire cheese, red onions, and mustard) but it was underdone (again! I’m beginning to suspect that my oven is broken)

I had a big fright after making this when I found the bag of flour that I’d planned to use didn’t appear to have been used, meaning that I’d made the cake with normal flour, and it wouldn’t be a valid entry for the class. Then I found the other bag of gluten free flour, which I obviously had used. So I could still enter the class, but the of the two bags of flour, I’d accidentally used the one which had produced the worse results of the two practice bakes. I did use the recipe from the better practice, but the final result came somewhere between the two.

Another one requiring multiple bakes on the day, but the only one where it made a  difference. The first pastry case that I made came out reasonably well, but there was a massive bubble in the side which I couldn’t easily hide. Fortunately, I had loads of pastry left over, so I had another go. The second attempt was better baked and bubble free. Apart from the decoration on top. this is a fairly standard quiche Lorraine. 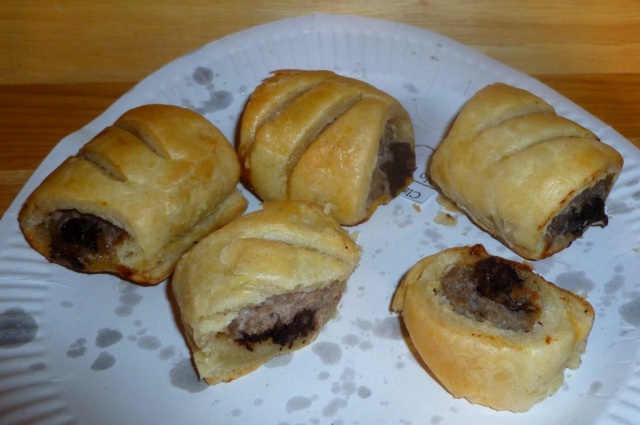 These are filled with pork and apple sausage meat, surrounding a fruity black pudding core. I think they taste amazing, but they also appear to be slightly underbaked.

This one also went through multiple revisions on the day. I overcooked the first one (makes a change), and one of the layers came out very lopsided. So I made another one, which was much better cooked and much more even. Then when I opened the jam for the filling, I found lots of mould in the jar. Lucky for me, I located another jar, but as this was on the morning of the show, the extra delay was extremely unwelcome.

Class 40: Individual dessert for one

I decided that the banana in the practice dessert just made things too complicated, so this rice pudding only has strawberry and Nutella layers, which are much more clearly defined than the 3-layer version. As well as the chocolate covered strawberry on top, there are also a few roasted hazelnuts. I think this came out pretty well overall, but I might have put a bit too much sugar in for the judges’ taste. 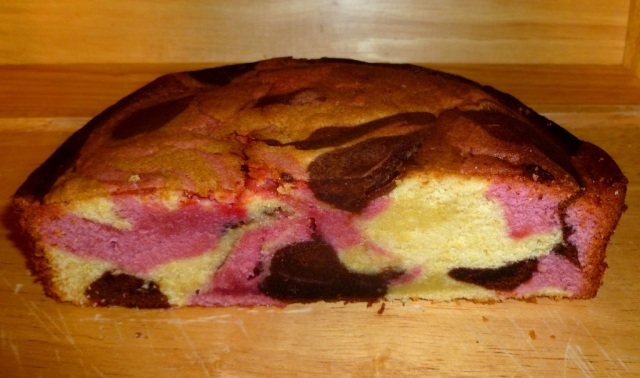 This is chocolate, lemon and rose, It needed  bit more swirling to get a proper marble effect, and couple more miniutes in the oven wouldn’t have hurt.

Class 42: A shortbread round 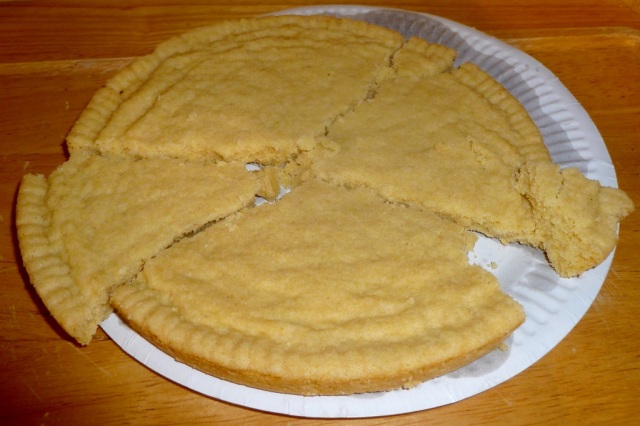 This was one of the classes about which I asked questions of the organisers a few weeks before the show. I thought that they’d said that markings weren’t required, but the judges left a note covering almost all of the entries to say that there should be divisions marked on the top. I must remember to put a doily on the plate next time. 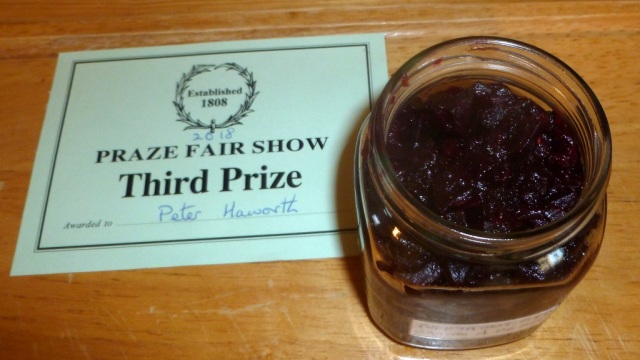 Not bad for my first ever attempt at making chutney., but I think it could do with being just very slightly less solid. This was made from beetroot, red onion and pear, several weeks before the show.

Very much a last minute affair, although I did boil and dye the egg a few days in advance. I was hoping I might find something a bit more interesting, but this turned out to be the only silk tie I had, and although the transfer of the dye to the egg worked better than I was expecting, it could have been a lot clearer. I also had no plans for what to add other than the dye. In the end, I realised that I could at least use the rest of the tie, but even that almost didn’t happen, as I had quite a lot of trouble tying it in the right place without putting it round my neck. Still, if one of the other entries wasn’t disqualified for using a polystyrene egg, I suspect that this wouldn’t even rate a Highly Commended.

I”ve posted all of my photography entries on Flickr, but two deserve mention here:

I did actually manage to take a reasonable picture of a pair of photogenic dogs, and that might just about have been worth a place, but there were a lot of entries in this class, and everyone else stuck with dogs (though one or two also had other animals as well), so I decided that Sherlock posing with my shoe was at least unique enough to draw attention. It clearly did catch the eye of the judges, but not quite enough for any points.

I captioned this as “The Bug”, by Dire Straits. Not bad for a random insect that I just happened to see ambling across the pavement while I was walking home one night.

So from my entries in 30 classes, I managed 1 First (also Best Exhibit in that section), 1 Second, 3 Thirds, and 1 Highly Commended. I also somehow managed to get them all prepared in time (though at the cost of a night’s sleep due to 3 repeat bakes), and carried them all to the tent in one go in a giant rucksack. Oh, and I also got 3rd prize for my costume in the carnival, and won a bottle of wine and an Eden Project family ticket in the raffles.

Photos from the last day of  the ninth “Weekend at the Asylum” steampunk festival in Lincoln. Click on them for larger views END_OF_DOCUMENT_TOKEN_TO_BE_REPLACED

Photos from the third day of  the ninth “Weekend at the Asylum” steampunk festival in Lincoln. Click on them for larger views END_OF_DOCUMENT_TOKEN_TO_BE_REPLACED

Photos from the first day of  the ninth “Weekend at the Asylum” steampunk festival in Lincoln. END_OF_DOCUMENT_TOKEN_TO_BE_REPLACED

I posted a few pics yesterday on twitter, but had to go to bed before I’d processed any of the parade photos. There are quite a few, so rather than a massive string of tweets, I’ve put them all here:

This doesn’t immediately look like a good route for a steam parade, but nobody got steamrollered

It’s not Whistling Billy, but it is a steam car

One last steamroller, to ensure the complete flatness of Trelowarren Street

“Pirate” brings up the rear

While browsing the Market of Curiosities at the Frome Steampunk Extravaganza last weekend, I got talking to the friendly people at the Hot Sauce Emporium stand. One of them turned out to be a fellow porridge adulerator, and one outcome from our discussion which started with merely adding flavours to oats, was the idea of the refried porridge burrito. Having acquired some of Dr Burnorium’s ghost-pepper-stuffed Psycho Chocolate at the stall, this morning I made my first attempt at realising the idea.

Actually, I started last night, by making some relatively plain porridge (oats and soya milk, plus some diced sweet potato, mainly for a bit of interest, but also because it’s the closest to beans I had available). I usually make my porridge quite thick, but leaving it overnight allowed it to set further, making it more amenable to refrying, which was the first step this morning: 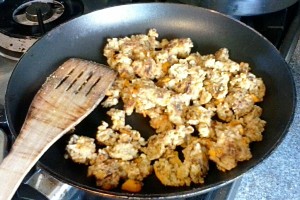 That would probably be just about OK on its own, but maybe a bit bland. So, what else commonly goes in burritos? Depending on the variant you prefer, it might be something along the lines of chilli, rice and cheese. With what I had to hand this morning, that meant Psycho Chocolate (all three flavours, of course), amazake, and Stinking Bishop (also acquired while at FSE, albeit in Frome’s regular Saturday market):

Laying out the burrito filling

Then I just had to roll it up and sample the results, which I’m glad to say were extremely satisfactory. I still have plenty of the chocolate left, as it’s wasteful (and possibly dangerous) to eat more than a couple of chunks in one sitting, so I may try to improve on the recipe in next weekend’s cereal experiment.

Now that’s what I call a breakfast burrito!

I’m sure I’ve said it here before, but porridge really is jolly good stuff. The very blandness which puts some people off means that by adding pretty much any flavour (sweet, savoury or both) you can make something tasty and filling. Oh, and another surprise from the conversation at the stand was finding the only other person I’ve met so far who has discovered for himself the awesome flavour combination of honey and Marmite, though he didn’t reveal to what use he’d put it.

Due to mechanical difficulties, I wasn’t able to particpate in as many of the festival events as I’d planned. I did manage the first and last days though, and took a few photos while I was out.
END_OF_DOCUMENT_TOKEN_TO_BE_REPLACED

It’s been a few weeks since LPW 2012, so I thought I’d better write up my thoughts on it while I still retain the tiniest scintilla of memory. This year’s theme was “25 years of Perl”, as the workshop was held just a month shy of the 25th anniversary of the release of perl 1.0 on an unsuspecting world.
END_OF_DOCUMENT_TOKEN_TO_BE_REPLACED

Over the last few years, I’ve made Mince pie porridge, Christmas pudding ice cream and Mince pie ice cream for Christmas. This year, I further improved the porridge recipe, and came up with a rather different festive ice cream.